Liberals couldn’t wait 24 hours and immediately attacked Koby Bryant after his death in a helicopter crash that also took the life of his 13-year-old daughter.

Verified users are withheld for politicians, celebrities, and journalists. We posted screenshots of the tweets because some people are deleting their tweets quickly due to the tremendous backlash. Keep in mind some of these posts were published before the bodies were removed from the wreckage.

First up was Felicia Sonmez, a Washington Post reporter who tweeted an article from the Daily Beast titled, “Kobe Bryant’s Disturbing Rape Case: The DNA Evidence, the Accuser’s Story, and the Half-Confession.” 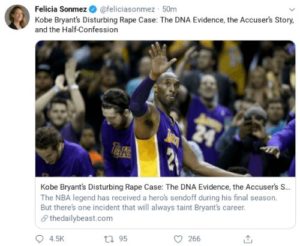 Literally, thousands of people told her to delete the post that contained an article from three years ago but, she decided to defend herself. “Well, THAT was eye-opening. To the 10,000 people (literally) who have commented and emailed me with abuse and death threats, please take a moment and read the story — which was written 3+ years ago, and not by me. Any public figure is worth remembering in their totality 1/2”

“even if that public figure is beloved and that totality unsettling. That folks are responding with rage & threats toward me (someone who didn’t even write the piece but found it well-reported) speaks volumes about the pressure people come under to stay silent in these cases. 2/2”

She wrote in another now-deleted tweet showing how much and how quickly she got hate mail over the tweet.

Guardian columnist Shailja Patel posted a 2016 article from ThinkProgress accusing him of “victim-blaming.” 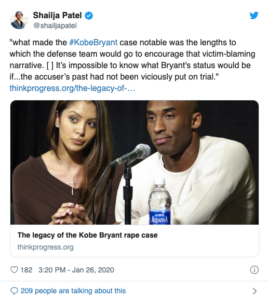 Danielle Campoamor who has written for the Washington Post and the New York Times characterized Bryant as a rapist as well.

Journalist Sarah Kelly wanted everyone to realize “the fact that you’re publicly mourning a rapist.”

Look, I’m not going to say Kobe was a stand-up guy his entire life, I’m not even a basketball fan but, he was never convicted of a crime either. These “woke” liberals are so vitriolic, the man hasn’t even been officially declared dead yet and people are attacking him.